“I’ll come back here again, but after a few years, if I’m stronger, more experienced and able to fight for the podium.” That were my words after World Champs 2017. Even like last year, I can  say again: a lot things can happen in a year! Returning to Hawaii felt excited and finishing in top 3 seemed a real goal. We started to make a plan in the beginning of the season and finally  Saturday, October 13, I was there again! 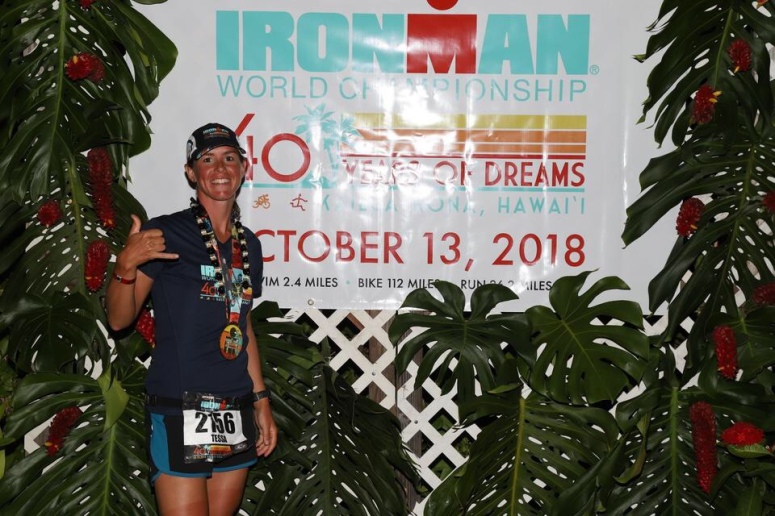 Only 4 full days I had to acclimatise, but already the first day I felt okay. My life on Lanzarote would give me a big advantage in the race, the heat felt familiar. I filled the days with final training sessions, drinking black gold Kona Coffee, enjoyed the expo, eating açaí bowls and resting. With my coach I stayed in a large airB&B house outside of Kona, peace and space around me.

Despite the pressure I gave myself, I was relaxed like never before, even the last day. I was confident, the preparation was more intensive, but good, and mentally I was full of fighting spirit. This had to be the moment, now it had to happen. The goal: top 3 (actually just winning) in a sub 10 hours.
Raceday, 4:00am for the alarm but 3:45 I was ready wide awake. Still not nervous and after a good breakfast and some rest, we left for the start. I was really excited to race, ready to smash it. After 10 minutes of water tripping, the start cannon sounded, we are off! Last year I decided to stay a little bit more on the left side, this year there was no second to lose, so I was right in the hustle and I concluded halfway that I swom very well, 29 minutes. With an intended swimming time of 1:05 the way backwas probably a bit more against the current. Where I normally tend to lose my focus in the water, now I was more focused to swim with others in the slipstream. An Ironman can´t be planned but part 1 was done according to plan!

After a fast transition, swimsuit off, Fusion SLI longsleeve on (keep you cool in warm conditions), the 180km ride started on the Queen K Highway. From my coach I heard I was in 13th position in my agegroup, the hunt could start, but race with the head!

The woman in my agegroup all had a number in 2100, so after catching one by one I was 99% sure I was leading the race. After about 120/130km I was overtaken again, apparently a competitor who also easily turned the pedals around. I decided to follow her at a suitable distance but soon saw my power rising and let her go. If I go crazy now, I blow myself up for the marathon. Stick to the plan, 220W no more, and if possible no less. Proud that I managed to control myself here, afterwards I think I won the race here.

With a small gap on the first lady I arrived with a ‘fresh’ body in the transition zone, ready for the marathon. Because of another fast transition, Fusion SLI longsleeve off, socks and shoes on, while running putting visor and Julbo sports glasses on, I won 1 minute. I finished the bike in 4h56, 10 minutes faster than planned. We were blessed with good conditions, but apart from that, this said something about my form of the day. Resting/waiting in the sun my coach was surprised when he saw me pass by and too late to give me info. He took a sprint to shout: “You are 2nd!” to which I firmly replied: “I know”. I was 100% in focus, afterwards we laughed hard about it.

After about 6km we reached a turning point and I saw the leading woman coming back, I looked at my Garmin and reached the turning point less than a minute later, concluding  she was less than 2 minutes ahead of me. The marathon is long and anything can happen, for her, but also for me. I ran a good pace but couldn´t really find the relaxed rhythm, till I arrived on the highway after about 12km. Supporters, music and encouragement are fantastic, but sometimes I just need ‘rest’ to be able to focus on what I’m doing.

I was completely surprised when I heard that the number 1 was only 1’40 ahead of me, which meant I was running in very slowly. Something that I´m not used to in a competition. Normally I´m able to keep my position in the run, but catch up?!?! Since that moment the only thing what was on my wind: ‘I feel good and if we run more or less the same pace I will catch you!’ But again, race with my head, do not accelerate, wait and see how the next kilometers will go. I arrived at the beginning of the famous Energylab, my favorite part and after what happened here even more! The distance to the leader was reduced and when I arrived at the turning point she was barely 50/100 meters in front of me and I saw her walking through the aid station (where I keep running). ‘You are mine’ I thought, and I felt her looking and thinking: ‘f * ck there she comes’. In the heaviest part of the marathon, I went ‘on and over’, knowing that this would be a mental hit with the hammer for her and it gave me wings. I came back on the highway, looked back, nothing.. Still 12km continue to ‘eat’ and drink and put one leg for the other at this rate, I think it should be fine. Moreover, the last 3km are ‘for free’: a lot downhill and party-supporters!

From that point I dared to celebrate, 3km with a big smile, I can not describe the feeling .. disbelief, a dream .. I see my coach in the last few 100m and give him a tough high 5, I don´t know if I have to cry or laugh. Again everything falls into place and I finish an almost perfect race in a time that is even more incredible than the victory: 9:36:27 with a marathon of 3h29 (plan: 3.5 hours)! What do you mean a sub10..?!?!
Because after a week I still can´t tell my finish in words, I´ll show you how I celebrate my last meters on the black carpet, goose bumps again… 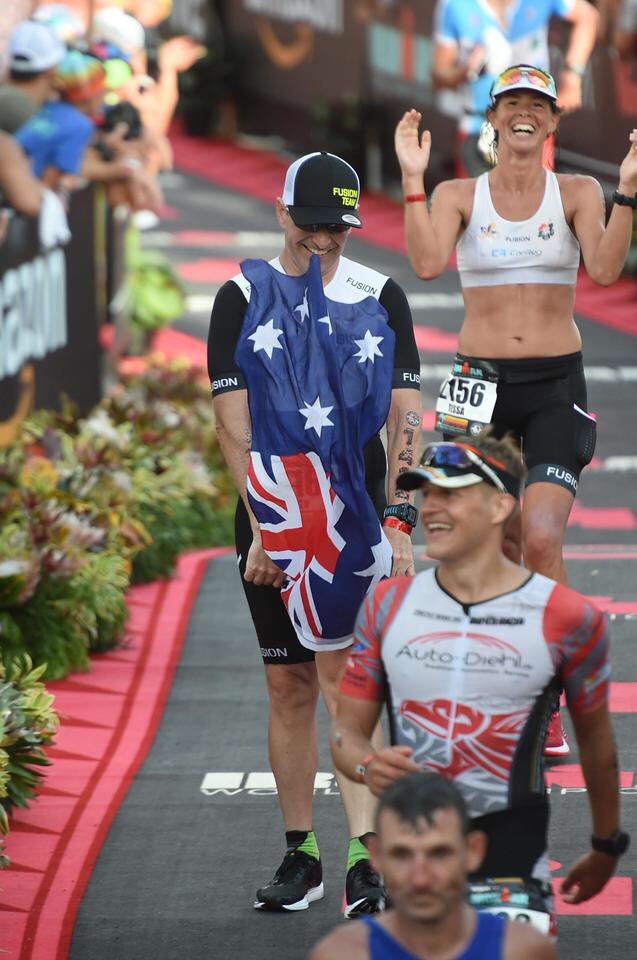 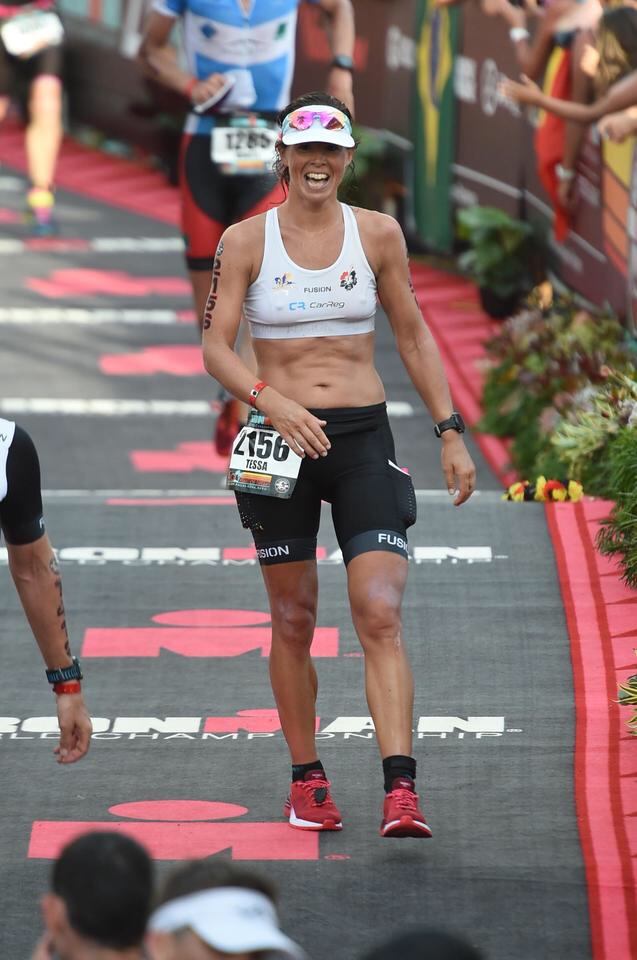 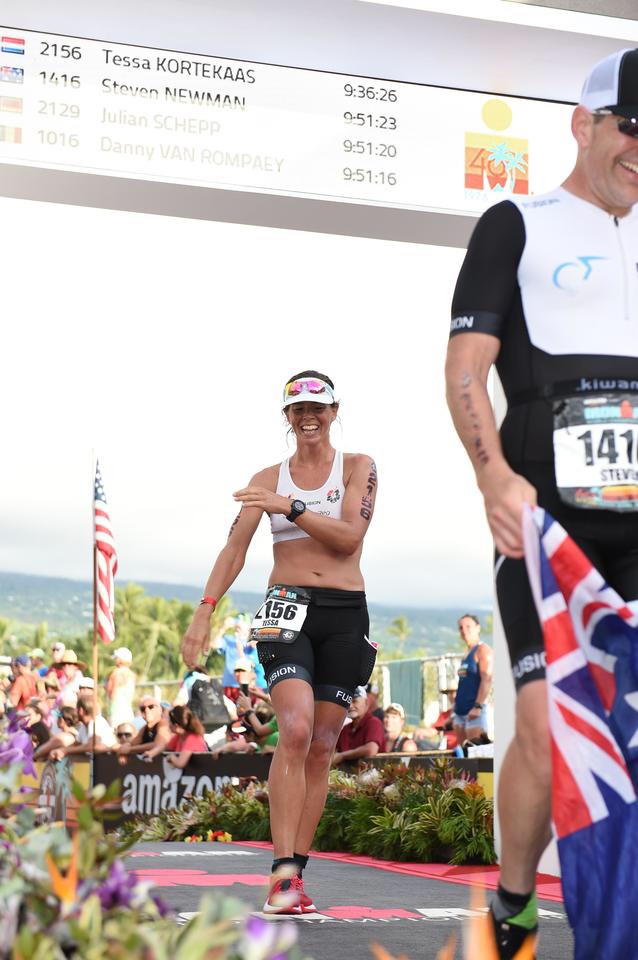 After the finish, tears of hapiness and discharge follow, fortunately I found the shoulders of two friends, and not much later officials took me for my doping piss. By returning, I saw my coach, we gave a hug and talked about the race, but I still couldn´t believe .. I have done something, but that it´s a World Champ victory in 9h36, you can´t make me believe. I was dying of hunger and crashed down in the recovery zone with pizza and french fries.

A short restless night follows, overloaded with messages, incredibly much, crazy! Little by little I realize what I have achieved, not only this World Championship but the whole season. IM Lanzarote was good and despite the stomach problems better than expected, IM Maastricht was exceptionally good, World Cup 70.3 South Africa was my best 1/2 ever, and then this one… But not only the races, all training sessions are done as planned. Well don’t lie, 2 I had to interrupt because of a slight injury. A season in which I have learned a lot and for which I´m rewarded after hard work: on top of the podium, the champion jersey and the Hawaiian bowl! 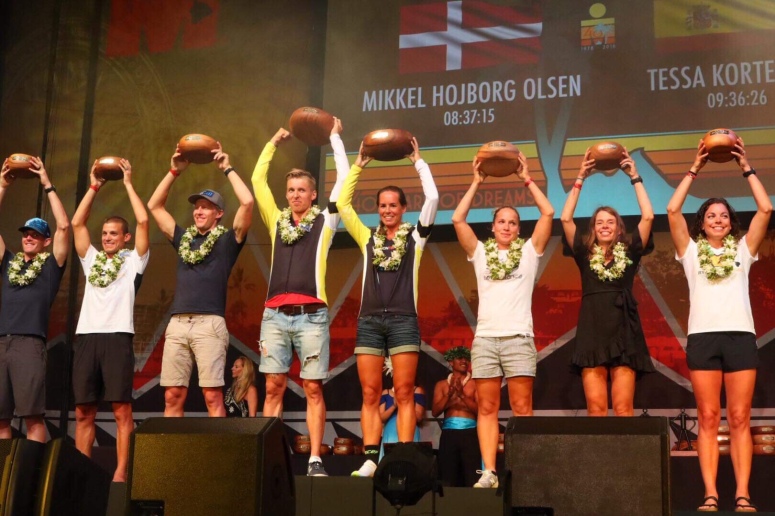 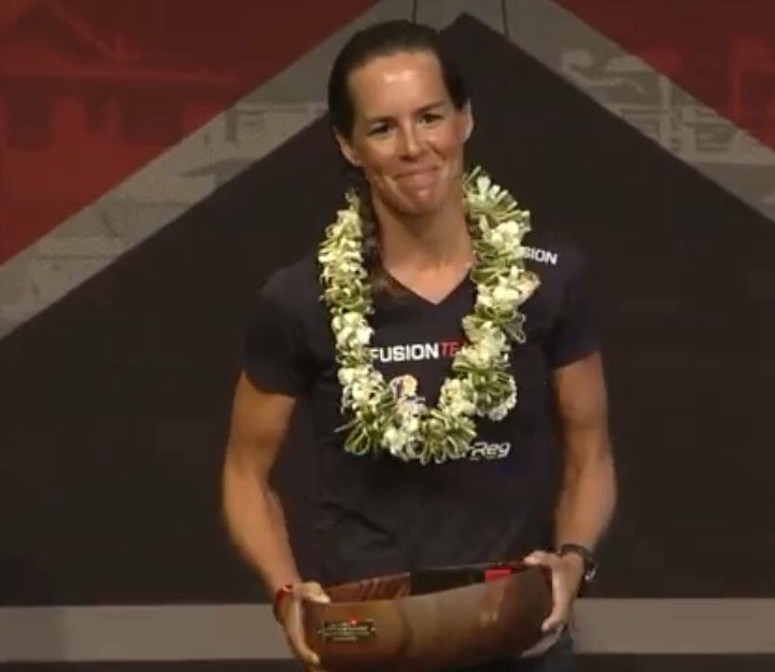 It´s the Hawaiian tradition to return the flowers back to the island by hanging it on a tree or leaving it in the ocean, it will bring good luck. Natural Energylab, one of the most famous and hardest parts of the marathon, is the most special place for me to do this. The most beautiful place, where I felt so powerful, took the lead and knew I shoeld never give it away anymore. A moment of peace and the realization came, I am World Champion! I let the tears run free.. 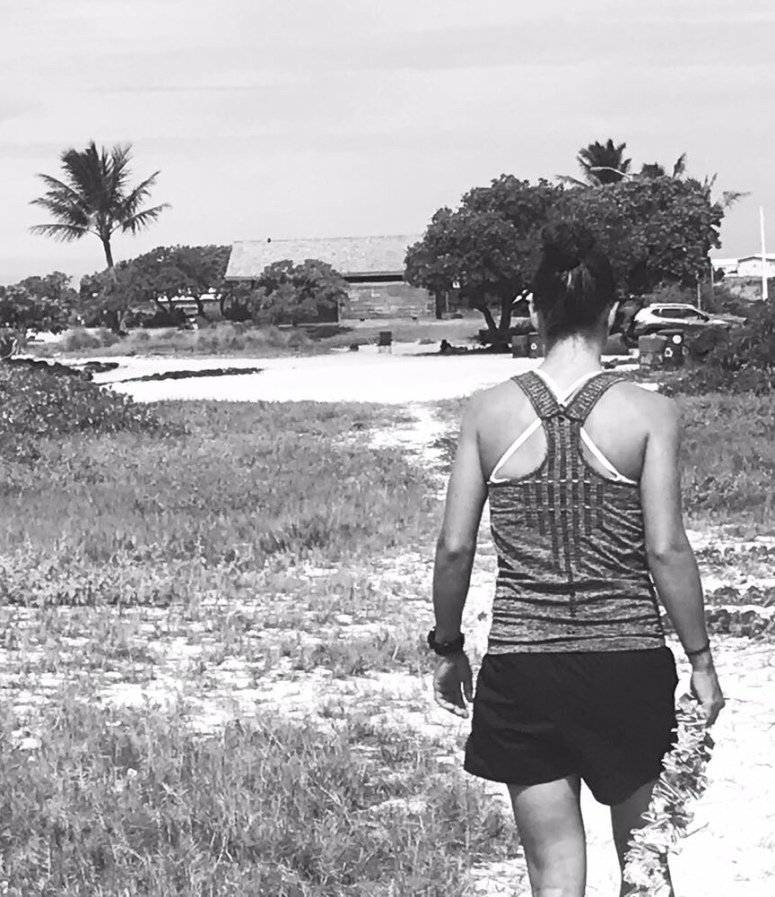 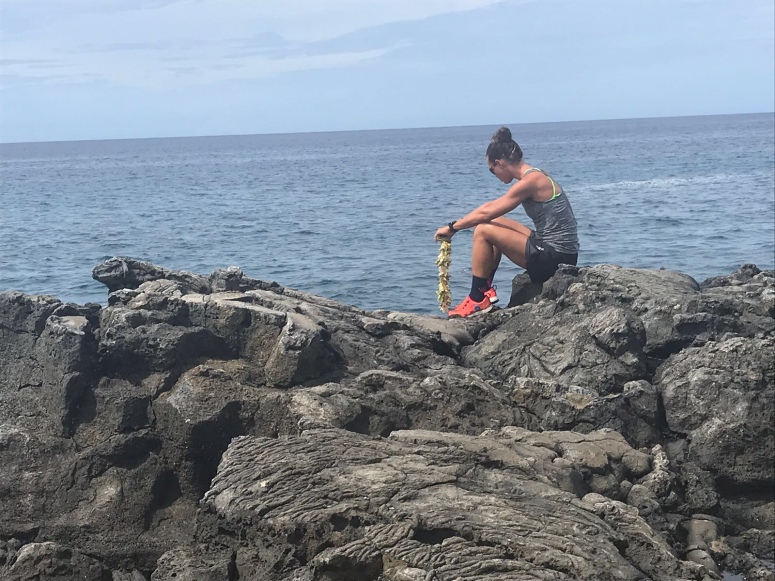 I want to thank everyone who followed and supported me close and from a distance, thanks a million for all the messages! Not only last week, but the entire season! Thanks to my sponsors who have made it possible to experience on this adventure. And all credits for my coach Miguel, even if it is my achievement, without you I wouldn´t have achieved what we have achieved now!