What is the value of a (pro)triathlete if you are not always 100% positive before a race and don’t you expect the ultimate of yourself?

Unfortunately, Ironman Lanzarote didn’t become what I was hoping for. I went for top 3 but it became position 8. A race with a story… With a swim better than ever, in a turbulent sea, I came out of the water within an hour. Exactly according to plan and the gap to the leader in the race was ‘only’ 6 minutes. The encouragements was awesome, I was looking forward to the elemental battle on the bike course, but above all to the marathon on the boulevard. The support was going to be grand.

I quickly got my rhythm on the bike and the legs felt good. I was in position 6/7 and the differences weren’t really getting smaller, everyone can ride fast now a days. The strong wind didn’t bother me, I was focused on what I had to do on the bike: head down and power on the pedals. That went well up to about 90 kilometers, when I got the feeling that my front tire went soft. A little later I was standing next to my bike with two pit-stop tubes that didn’t work, luckily the CO2 was sufficient and I was able to continue. All the spirit to fight disappeared and in the descent that followed I made up my mind. Pissed as I was, I decided to go for an all-or-nothing-scenario. I pushed against the upper limit of my power zone and took the necessary risks in the descents, hoping to regain some time. A 40km before the end, I felt my front tire soften again. I had wasted my spare shit so I crossed my fingers to reach the next AID station. I made it but no mechanic. With a half soft tire, I pushed like crazy and got passed by many athletes. 5km futher up finally found a mechanic who could provide me with air.

The mentally toughest part of the course was waiting for me, great if now really all the spirit to fight has disappeared.. I just wanted to get rid of that f *** bike and run. Even though I knew top 3 was no longer possible, I knew that there was a huge crowd of over-enthusiastic supporters waiting for me.

I didn’t have a clue about my position and it didn’t matter. I just wanted to show a strong marathon and be proud that I just made a good race despite the bad luck. The first kilometers I found a back to hide a bit from the wind, the pace was a bit too fast, but I also took the risk here. Not being able to hide for the wind and still pushing yourself for the good pace could kill me as well. As soon as we got a bit more sheltered, I decided to slow down a bit.

Many got into trouble halfway the 42km and that unfortunately also happened to me a bit. It became a mental battle… In principle I could no longer win or loose positions, the legs started to feel heavy, I went on autopilot. The logical consequence of my (despite or thanks to… the flat tires) too strong bike ride. The encouragements were impressive, both from the sidelines and well-known participants, I enjoyed it even though it wasn’t visible on my face. I just wanted to cross finish line!

For many times during the race I got a lump in my throat and I couldn’t keep it dry for the last kilometer. No tears of disappointment. Of course I am disappointed, but these things are part of the game. The emotion bursts out of me, when I’m performing at such a stress level for more than 10 hours, I can even have it when everything goes perfectly. In addition, it may be clear that I have conquered the (triathlon) hearts of many on the island and they have pulled me through the marathon. That does something to you when you reach the red Ironman carpet that is rolled out on your training path. Goosebumps…

It took me a restless night to realize that there is no reason to be disappointed. I can be proud of my almost being-a-dolphin performance, I’ve ride strong, although I took some risks, which prevented me from completing the marathon in the planned 3:15 / 3:20. But hey 3:30! A certainly tougher edition than last year, including the trouble, I was 8 minutes faster!

They know me here as the girl with the smile: “Head up high and bring that smile back on your face!” They are right! I expect a lot from myself and that will often cause disappointments, but it makes me stronger and brings me further. What is the value of a (pro) triathlete who is soon 100% satisfied after the race? 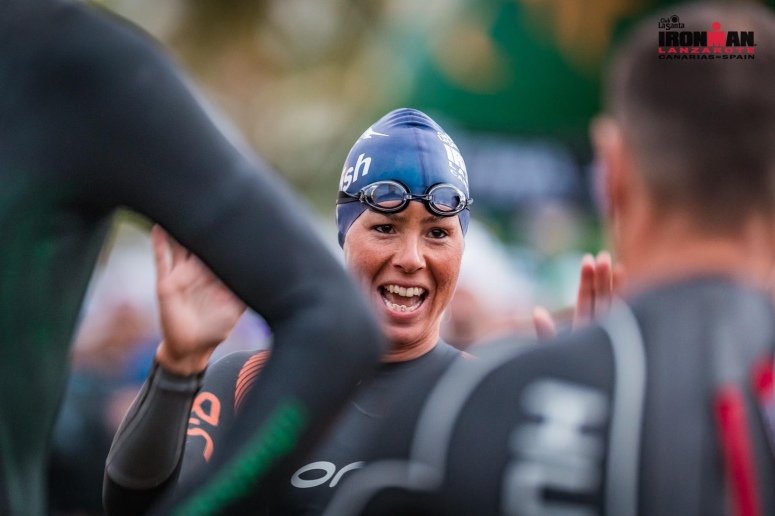 It was a busy preseason, now it’s time for a bit of rest for body and mind, charge up and on to the next goal! I’ve put a smile on my face again! 😊